Theater review: ‘A Comedy of Tenors'

Bob Abelman, For The News-Herald

The more, the merrier in Cleveland Play House's ‘A Comedy of Tenors'

Sometimes, whether through divine intervention or the heights of human inspiration, art is elevated to a higher level and becomes transcendent.

Evidence of this can be found in the masterworks of Monet, Mozart, Michelangelo and, now, Ludwig.

OK, this is a huge exaggeration. Which is fine considering playwright Ken Ludwig’s art form of choice is farce, where overstatement is not only expected but required. In his plays, clueless characters find themselves mistaken for others, running in circles in their underwear, and in unlikely situations that escalate in pace and improbability to the point of absurdity. And many doors get slammed in their wake.

No, farce is not fine art or high art. But Ludwig has most certainly raised the bar with “A Comedy of Tenors,” currently on stage at Playhouse Square in its world premiere by Cleveland Play House and officially billed as “Ken Ludwig’s A Comedy of Tenors.”

And he has done it in true farce fashion: by unabashedly appropriating this play’s form, formula and funny-business from the best in the business. Namely, himself.

In Ludwig’s Tony Award-winning “Lend Me a Tenor,” which was first performed in London’s West End and on Broadway in the late 1980s, it is 1934 and Tito Merelli – the impulsive, world-famous Italian tenor – arrives in Cleveland to appear in Verdi’s “Otello.”

Although he is placed in the overprotective custody of a highly temperamental wife, Maria, and the opera house’s milquetoast assistant manager, Max, Tito is rendered unfit to perform. The opera house’s tyrannical general manager, Saunders, reluctantly allows Max, who is an amateur opera singer, to go on in disguise. When Tito recovers and attempts to make his presence known, comedic chaos breaks out, romantic complications arise, and many doors are slammed.

“A Comedy of Tenors” is the sequel, featuring the return of Tito (Bradley Dean), Maria (Antionette LaVecchia), Saunders (Ron Orbach), and Max (Rob McClure, last seen on the CPH stage in the 2011 world premiere of Ludwig’s “The Game’s Afoot”).

This time they find themselves at a five-star hotel in Paris in 1936 to stage the concert of the century with three of the world’s greatest opera sensations on the bill – Tito, Max and Carlo (Bobby Conte Thornton). Also at the hotel is Tito’s young daughter Mimi (Kristen Martin), who is in a secret relationship with Carlo; Tatiana Racon (Lisa Brescia), a world-renown Russian soprano and former lover of Tito’s; and an opera-singing bellhop who bears a frightening resemblance to Tito.

One hotel room with multiple doors for slamming. Four temperamental tenors with assorted wives and lovers. What could possibly go wrong?

Well, everything. And it does so with meticulous precision, impeccable comic timing and unmatched production values that lift farce above its lowly station. From conception to execution, everything about “A Comedy of Tenors” hits on all comedic cylinders and, as advertised, is laugh-out-loud funny.

Credit the play’s precision to director Stephen Wadsworth, who has not only translated from its original French Beaumarchais’ operatic comedies and adapted them for American audiences but directed on Broadway Terrence McNally’s play “Master Class,” which incorporates incidental music by Verdi, Puccini and Bellini. Wadsworth is well schooled in merging high and commercial art as well as meticulously interweaving classical music with comedy.

And he is working with top-notch performers with impeccable comic timing and musical theater experience. All the actors in this ensemble have found a unique voice for each of their characters that beautifully positions them to deliver one-liners, pratfalls and a tongue-in-cheek running gag involving deli meat. But they have also found their characters’ hearts, which adds dimension to their relationships and depth to the belly laughs that result when the relationships go temporarily south.

All this takes place in a gorgeous art deco hotel room with window views overlooking downtown Paris, designed by Charlie Corcoran, lit by David Lander, and infused with rich sound by Joshua Horvath.

CPH’s sets often get ovations, but the powers-that-be pulled out all the stops to create such an elegant look and feel for this first production of its 100th season that audience members sat in stunned silence when the curtains opened. The astounding period costuming by Tony Award-winning designer William Ivey Long had a similar effect.

Karl Marx, who knew a thing or two about comic timing, once said that “History repeats itself, first as tragedy, second as farce.” In Ludwig’s case, the history of his plays begin as farce and repeat as transcendent comedy sure to have a long life and remarkable success. 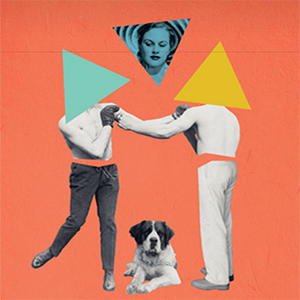